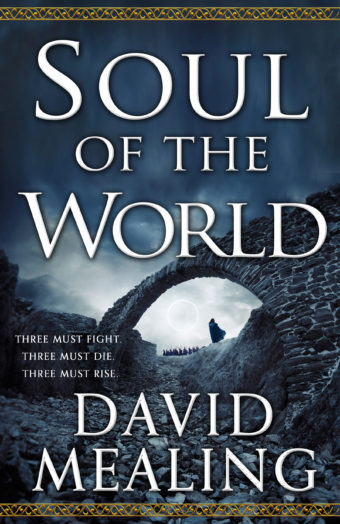 Soul of the World

It is a time of revolution. In the cities, food shortages stir citizens to riots against the crown. In the wilds, new magic threatens the dominance of the tribes. and on the battlefields, even the most brilliant commanders struggle in the shadow of total war. Three lines of magic must be mastered in order to usher in a new age, and three heroes must emerge.

Sarine is an artist on the streets of New Sarresant whose secret familiar helps her uncover bloodlust and madness where she expected only revolutionary fervor.

Arak’Jur wields the power of beasts to keep his people safe, but his strength cannot protect them from war amongst themselves.

Erris is a brilliant cavalry officer trying to defend New Sarresant from an enemy general armed with magic she barely understands.

Each must learn the secrets of their power in time to guide their people through ruin. But a greater evil may be trying to stop them.

“The first book in The Ascension Cycle is an impressive fantasy debut with three main compelling characters and a unique magic system sure to capture a fantasy reader’s attention . . . . Mealing does a fabulous job with the intricate world-building and leaves the reader wanting to get their hands on the sequel.”

“A story of magic, ambition, greed, betrayal, and war.”

“I was blown away by how much I enjoyed it . . . . Soul of the World is a magical book, almost overflowing with originality.”

—The Quill to Live

“A riveting debut. It’s got everything I could possibly want in a fantasy book.”

“The magic systems in this book are epic and the comparison to Sanderson and Rothfuss is quite deserved.”

—On Starships and Dragonwings Book Reviews

Also In This Series