David Mealing was born in Salt Lake City, UT, where he lived for approximately twelve seconds before relocating, first to Texas, then to California. He discovered gaming before he learned to talk, growing up playing Atari, Nintendo, and computer games, as well as war games, card games, and role-playing games of all kinds. His earliest gaming memories include facing down a lion as a four year old in a Dungeons and Dragons game DM’d by one of his cousins, and thinking the Phoenix Hawk was just about the best ‘mech ever designed in BattleTech.

David’s family moved eleven times before he was in the 4th grade, and he’s always been jealous of people who graduated high school with people they went to kindergarten with. He sucked at making friends and still does, but he learned to love reading, especially fantasy and military history books. David Eddings, Raymond Feist, Orson Scott Card, J.R.R. Tolkien, and above all Robert Jordan were his guiding light through elementary and middle school.

In high school he discovered music, and at one point very seriously considered becoming a professional rock star. He’d played jazz and classical trumpet since elementary school, but devoted himself to playing the bass guitar at seventeen, going from having never touched the instrument to playing shows at the Roxy, Whisky A Go Go, House of Blues, and Galaxy Club within three months. He grew his hair long, lied to bouncers about his age to get them to let him into the clubs he was playing at, and generally didn’t apply himself to anything but music and online gaming for several years. At one point he attended UCLA, where he majored in EverQuest until discovering somehow this degree program wasn’t on file with the dean’s office (wtf?) and he was forced to drop out.

Depression set in, as it is wont to do for early twenty-somethings being told to decide what they want to do for the rest of their lives. Ultimately, David decided to cut his hair, work for a year at a law firm, and get serious about something he’d never taken seriously before: his education. He applied and was accepted to Oxford University’s Philosophy, Politics, and Economics program, and spent the next three years living in England, alternating between murderously difficult courses of study and bouts of extreme MMORPG playing. Along the way he learned to form and defend an opinion – even on topics he knows close to nothing about – as well as rising to become raid- and co-guild- leader for the top North American linkshell on his Final Fantasy XI server. He scored a major coup when he poached an officer from a rival guild, and a second major coup when she for some reason agreed to meet him in real life, start dating, and eventually marry him.

David and Lindsay were married on August 14, 2005 at the actual castle where they filmed the X-Men movies. Their oldest daughter was born two years later, and was named for David’s World of Warcraft character. Two more daughters followed (though Lindsay refused to allow them to be named for WOW characters – not for lack of trying on David’s part), and they relocated to the Pacific Northwest for David’s career in the tech industry, where they continue to live today.

Along the way, David had never stopped reading, and he’d never stopped playing pen & paper RPGs. He loved immersing himself in the worlds of his favorite fantasy novels, and loved creating stories for his RPG campaigns. But for some reason he’d never tried mixing the two. Until one fateful week in Hawaii – on his first actual vacation in nine years – where he brought along a copy of Brandon Sanderson’s WORDS OF RADIANCE, read the whole thing, and asked himself why in the world he had never tried to write a novel himself? The day he got home he opened a word file, titled it ‘SOUL OF THE WORLD’ and started writing. Nine months later he had a first draft. The rest is still being written, but between Lindsay, his kids, and his stories, David has found the great loves of his life, and expects to keep writing until they put him in the ground. 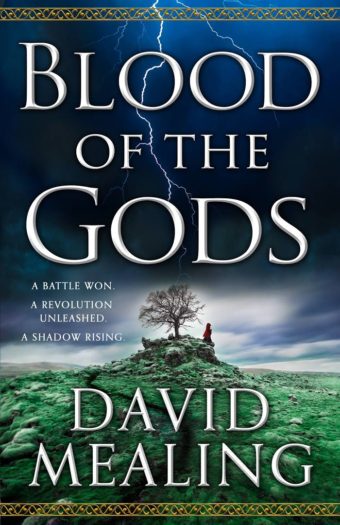 Blood of the Gods

The battle is over, but war lies ahead in the second book of the epic fantasy trilogy that pits humans against gods in a contest for the fate of the world.